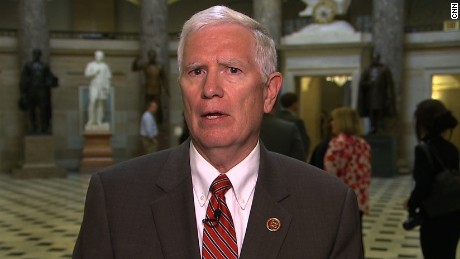 About six weeks away from the special primary for Alabama’s U.S. Senate seat, the battle is escalating between Incumbent Sen. Luther Strange and Congressman Mo Brooks, one of his top Republican opponents.

A new mailer, paid for by the Strange for Senate committee, blasts Brooks for not supporting then-candidate Donald Trump in the 2016 presidential primary, as well as his criticism after Trump won the nomination.

Brooks, Strange and former state Supreme Court Chief Justice Roy Moore are the three leaders in a crowded GOP primary, with a (likely) September runoff, unless a single candidate gets 50 percent plus one in August.

As reported by POLITICO, Strange’s mailer quotes Brooks as saying on MSNBC in February: “Trump voters are going to regret their votes.”

After Trump won the nomination in May, Brooks told the Montgomery Advertiser: “Voters sure are facing some tough choices in November, aren’t they?” (He later admitted he would vote for Trump in November.)”

The mailer proclaimed that “Luther Strange strongly supported our President from Day 1,” adding, “this was never a ‘tough choice’ for Luther Strange.”

Appointed to the Senate in February by then-Governor Robert Bentley, Strange is facing a crowded 10-person field for the Aug. 15 Republican primary. A primary runoff, if necessary, will be Sept. 26; a general election is Dec. 12.